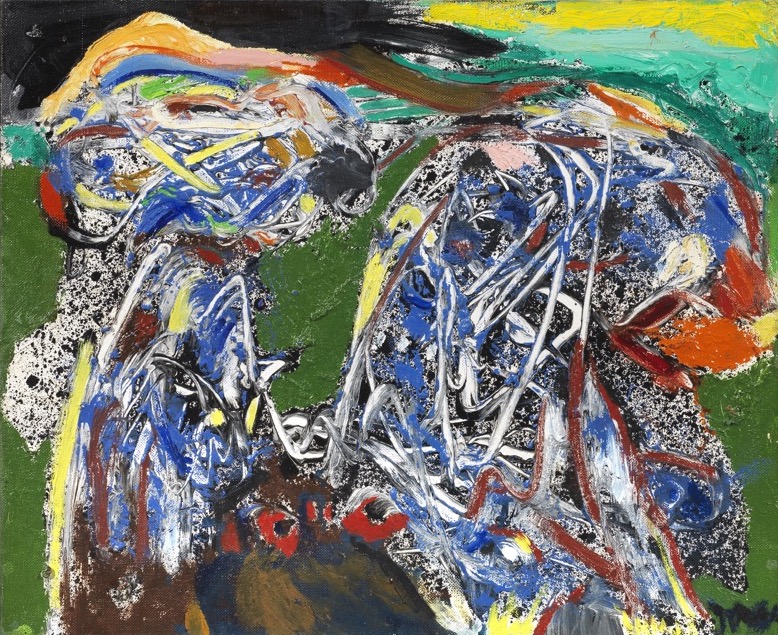 Asger Jorn was a Danish painter. In 1936 he went to Paris to study under the teachings of F. Leger at the Academy of art.

During the war, he animated the Danish surrealist and abstract movement. After the war he returned to France where, in 1948,  along with Christian Dotremont, Karel Appel, Corneille, and Constant Nieuwenhuys, founded the European avant-garde movement CoBrA. The new group took its name from a combination of Copenhagen, Brussels, and Amsterdam, the cities from which the founders originated.

CoBrA was dissolved in 1951 due to a dispute about the extent to which art and politics should remain separate or integrated concerns. As a communist – of sorts – Jorn believed art should play an active role in advancing the revolutionary socialist cause, but other group members rejected his view.

In 1953 he began his intensive work in ceramics. The following year he settled in Italy, in a city called Albisola, where he participated at the Mouvement International pour un Bauhaus Imaginiste (International movement for an imaginist Bauhaus, 1953–57).  Here he became close with several of the international artists working there, including Enrico Baj, Corneille, Lucio Fontana, and Roberto Matta.

In 1964, Jorn participated in several international exhibitions, and his first retrospective exhibition was held in Basel, travelling to Amsterdam and Louisiana (near Copenhagen). His painting evolved somewhere between expressionism and the art of matter, in anthropomorphic depictions, bordering on the informal.