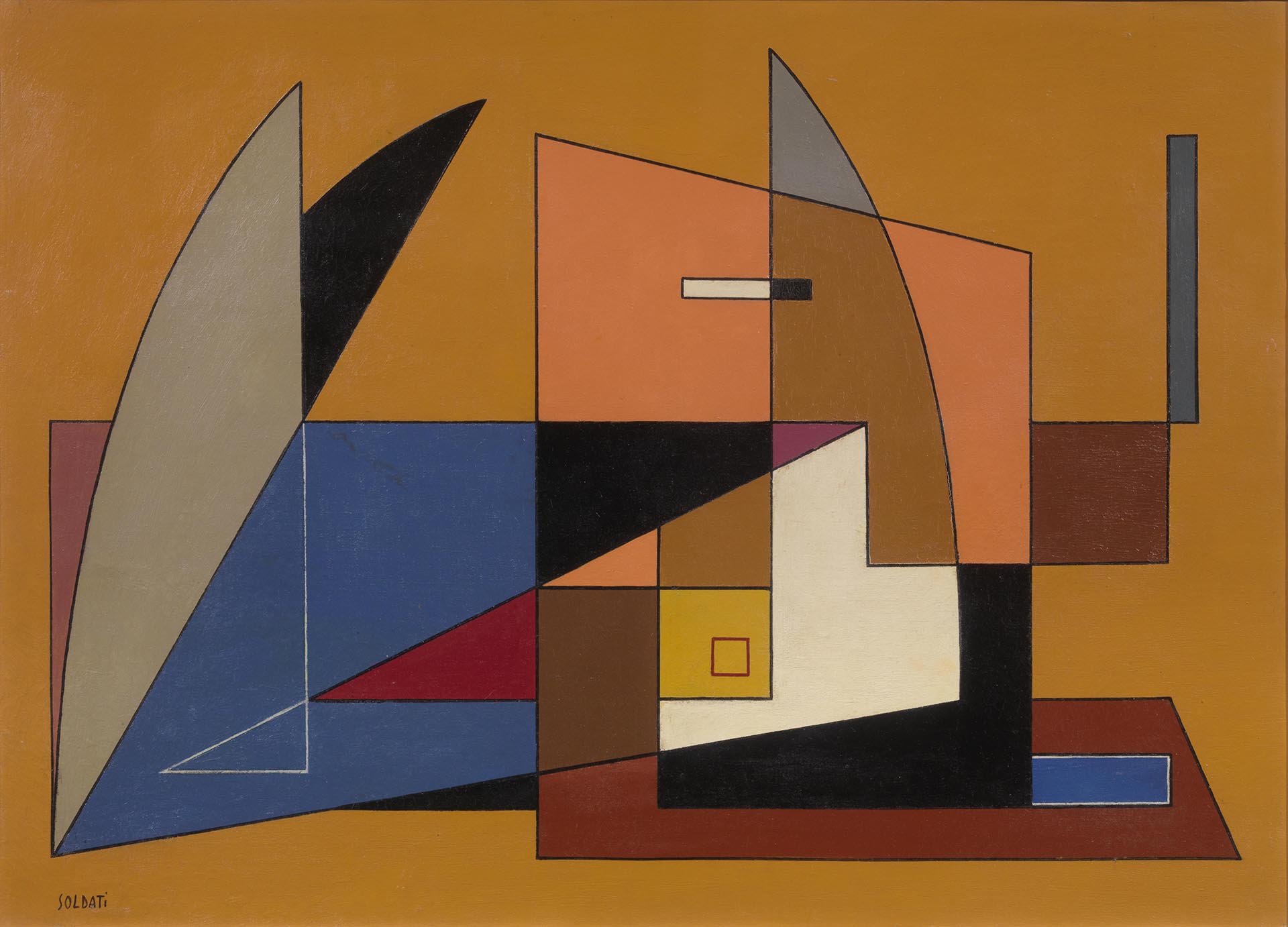 Atanasio Soldati was an Italian painter who in the 1930s became a central figure in Italian abstractionism.

Atanasio was trained in Parma in the 1920s as an architect. In 1925 he moved to Milan, where he met the abstractionists Mario Radice and Mauro Reggiani, who influenced his pictorial production hitherto linked to the purist figurative.

In 1931 he held a solo exhibition at the Il Milione gallery where he exhibited again the following year together with Bogliardi and Ghiringhelli. By attending the gallery, he got to know Léger, who led him to confront Cubism and to develop a language that starts precisely from geometric shapes, with vivid and non-nuanced colors, characterized by exact limits.

For Soldati abstract painting is the liberation of the image from figurative adherence; lines, colors and surprises express drama and feeling on the same level without any kind of superstructure. It is a painting, that of Soldati, which recognizes its human and dramatic substance as an intrinsic foundation.

In his mid-1930s production, he introduces a new lyricism in which the influences of Paul Klee and Kandinskij are recognized.

In recent years, he has developed a language close to neometaphysics, from which he quickly detaches himself to develop his own expressive autonomy in the immediate post-war period, consolidating his own poetics ideally close to Osvaldo Licini and Fausto Melotti.

Between 1943 and 1945 he was forced to stop the painter activity to actively participate in the Resistance. In the following years, he obtained a professorship at the Brera Academy in Milan.

In 1948 he created the Concrete Art Movement, together with Bruno Munari, Gillo Dorfles and Gianni Monnet, a new non-figurative language that does not impose formal constraints but opens up to various possibilities while respecting the independence of the visual element from any objectivity.

In the last years of work, we first witness a cooling of the palette and the simplification of the formal elements, with compositions with overlapping inlays, then in new imaginative stress that leads to musically expressed inlays, between chromatic and sign.

Soldati – together with Alberto Magnelli, Enrico Prampolini, and Mauro Reggiani – can be considered the pioneer of abstract art in Italy. During his career, he was invited to exhibit on prestigious occasions such as
The Rome Art Quadrennial in 1936 and the post-war Venice Art Biennials (1948, 1950, 1952).