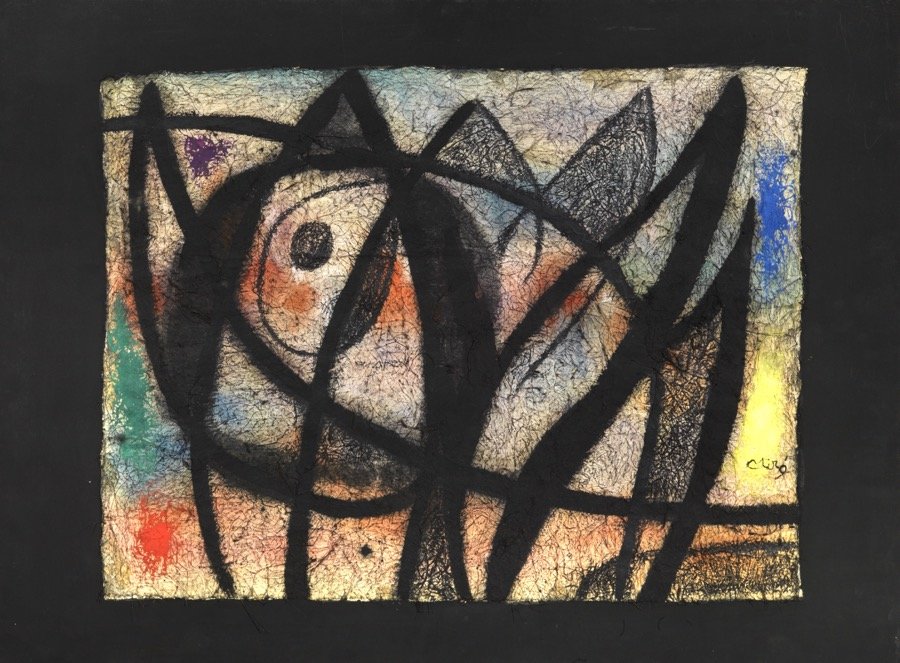 Joan Mirò went to business school in Barcelona aged 14, while also attending La Lonja’s Escuela Superior de Artes Industriales y Bellas Artes in the same city. After completing three years of art studies, he took a position as an office clerk. However, after suffering a nervous breakdown, he abandoned his business career and resumed his art studies, attending Francesc Galí’s Escola d’Art in Barcelona from 1912 to 1915. Miró received early encouragement from the dealer José Dalmau, who gave him his first solo show at his gallery in Barcelona in 1918.

In 1920 Miró made his first trip to Paris, where he met Pablo Picasso. From this time, Miró divided his time between Paris and Montroig, Spain. In Paris, he associated with the poets Max Jacob, Pierre Reverdy, and Tristan Tzara and participated in Dada activities. Dalmau organized Miró’s first solo show in Paris, at the Galerie la Licorne in 1921, and his work was included in the Salon d’Automne of 1923.

He visited the Netherlands in 1928 and began a series of paintings inspired by Dutch masters. That year he also executed his first papiers collés (pasted papers) and collages. In 1929 he started his experiments in lithography, and his first etchings date from 1933.

During the early 1930s he made Surrealist sculptures incorporating painted stones and found objects. In 1936 Miró left Spain because of the civil war, not returning until 1941. Also in 1936 Miró was included in the exhibitions Cubism and Abstract Art and Fantastic Art, Dada, Surrealism at the Museum of Modern Art, New York. The following year he was commissioned to create a monumental work for the Paris World’s Fair.

Miró’s first major museum retrospective was held at the Museum of Modern Art, New York, in 1941. In 1944 Miró began working in ceramics with Josep Lloréns y Artigas and started to concentrate on prints; from 1954 to 1958 he worked almost exclusively in these two mediums. He received the Grand Prize for Graphic Work at the Venice Biennale in 1954, and his work was included in the first Documenta exhibition in Kassel the following year.

In 1958 Miró was given a Guggenheim International Award for murals for the UNESCO building in Paris. The following year he resumed painting, initiating a series of mural-sized canvases. During the 1960s he began to work intensively in sculpture. Miró retrospectives took place at the Musée National d’Art Moderne, Paris, in 1962, and the Grand Palais, Paris, in 1974. In 1978 the Musée National d’Art Moderne exhibited over five hundred works in a major retrospective of his drawings.