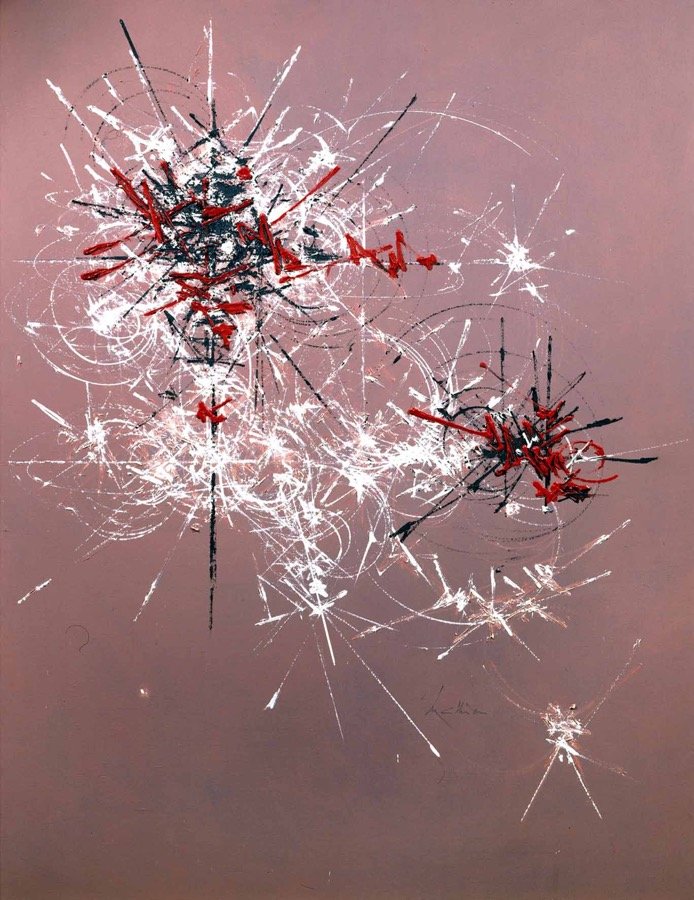 Mathieu undertook studies in literature, law and philosophy before devoting himself to art and producing his first paintings in 1942. He began his career by exhibiting at the “Salon des moins de trente ans” in Paris.

The following year he reacted against geometric abstraction in favor of an art with surreal and psychological inspirations, which he called “Abstraction Lyrique” and organized the exhibition “L’imaginaire” at the Galerie du Luxembourg. It became increasingly part of abstract expressionism and in 1948, at the Galerie de Montparnasse, he organized the first meeting between French and American artists, importing into France the work of Pollock, Tobey, de Kooning, Gorky, Reinhardt and Rothko. He was also an art theorist and published “Analogie de la non-figuration” in 1949.

During the 1950s he traveled to Italy, Japan and the United States, where he received a triumphant welcome. He engages in exhibitionist painting practices such as publicly painting pictures in a few minutes.

In 1954 he exhibited at the Kootz Gallery in New York and produced more and more large paintings.

In the 1960s he decided to make his “style” a “language”, creating furniture, jewelry, boxes for tapestries for the National Manufacture of the Gobelins, plates for Sèvres, posters for Air-France and medals for the Monnaie de Paris. Elected to the Academy of Fine Arts in 1975, his 170th solo exhibition took place in 1988 at the Galerie Protée in Paris.

His works are present in numerous private collections and in 79 museums around the world.