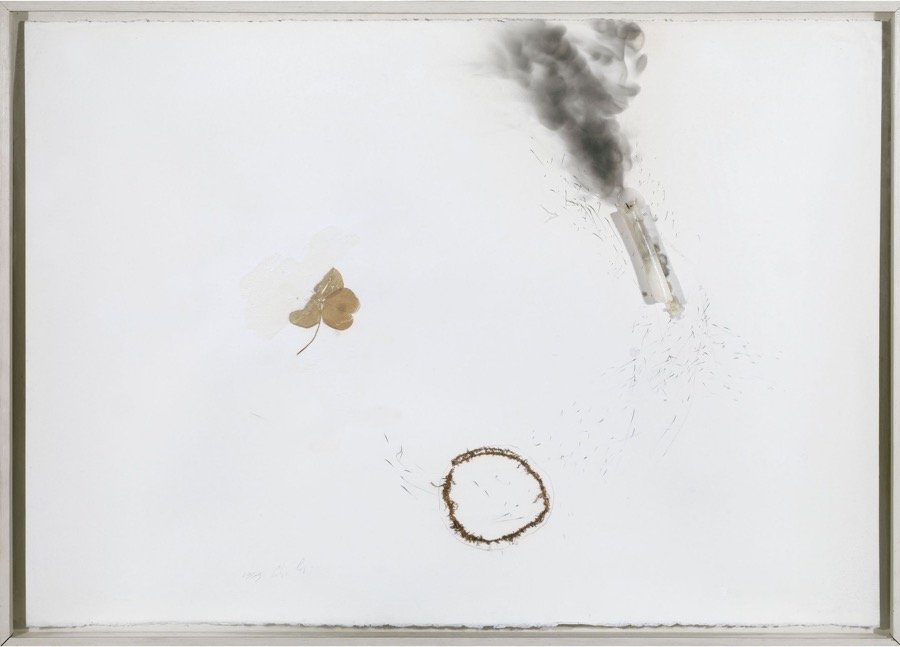 Bologna, 1943
Pier Paolo Calzolari grew up in Venice, whose Byzantine heritage greatly influenced his aesthetic. Returning to his birthplace in Bologna in 1965, Calzolari briefly dedicated himself to traditional painting before turning to more experimental practices.
His studio became a meeting point for the Italian avant-garde, showing experimental films by the likes of Andy Warhol, Jonas Merka and Mario Schifano, as well as the artist’s own performance pieces revolving around the activation of the space through the viewer’s involvement.
Calzolari’s move to Urbino in 1967 marked the beginning of a period of international travel, particularly as part of the Arte Povera movement of which he was considered a leading figure between 1967 and 1968, culminating in a solo show at the Sperone gallery in 1969.
During this time, Calzolari developed his work with neon and unconventional materials such as fire, ice, salt, moss, leaves, candles and refrigerator coils. Anchored in Arte Povera, Calzolari’s research nevertheless distinguishes itself through an introspective approach in searching for poetry in objects of his personal daily life resulting in works such as Oroscopo come progetto della mia vita (Horoscope as a project of my life), 1968.
In 1977, Calzolari moved to Turin where he was twice exhibited at the Tucci Russo gallery and continued experimenting with non-traditional mediums, deconstructing painting by using flannel or cardboard instead of canvas, and gold, lead salt, tin and wax to replace paint in his work on monochrome.
After a brief stint in Vienna, Calzolari returned to Urbino in 1984, where he currently works and resides. His work has been exhibited three times at the Venice Biennale in 1978, 1980 and 1990, as well as in Documenta in Kassel in 1992.
In 1994 an important retrospective was dedicated to him at the Galerie Nationale du Jeu de Paume in Paris and at the Castello di Rivoli.
Calzolari’s work is exhibited in important museums worldwide, such as the Art Institute of Chicago, the Solomon R. Guggenheim Museum, New York, the Centre Georges Pompidou, Paris, and the MAXXI – Museo delle Arti del XXI secolo, Rome.
© PIER PAOLO CALZOLARI, by SIAE 2020