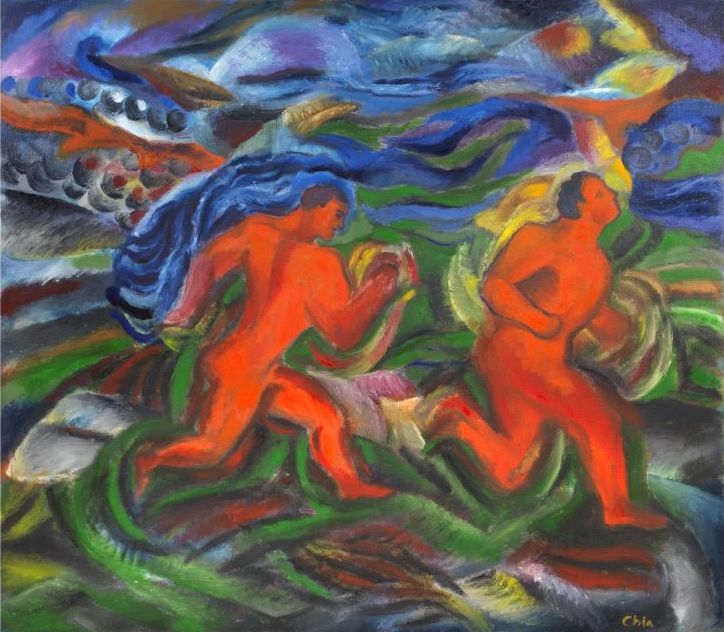 Sandro Chia is an Italian artist, painter and sculptor, one of the leading member of the Italian Transavantgarde movement.

His artistic vocation is strongly influenced by the paintings he sees regularly by visiting churches of Florence and the Uffizi Gallery. After his studies, he made a series of trips to India, Turkey and throughout Europe before settling in Rome in 1970. It was then that he experimented with conceptual art and the art of performance, before joining the Italian ‘Transavanguardia group’ with Francesco Clemente, Enzo Cucchi and Mimmo Paladino.

Chia insists on a return to painting, in order to stand out from the approach of Arte Povera or minimal art, which he considers too cold and intellectual. He tries to bring pictorial values ​​to the forefront by imposing the predominance of bright colors, playing on dense or transparent textures.

In the 1980s, Chia painted mythical themes, with figures whose accentuated musculature recalls the nudes of Michelangelo and Savino. At the center of his journey is his conception of the artist: an alchemist revealing the world with a spirit of ironic distance and innocent desires.

From 1985, he became truly recognized on the international scene, receiving numerous orders including painting of the interior of the Palio Bar in New York.

Since 1987, his paintings have been dominated by increasingly complex patterns, spatial ambiguities, inspired by Italian Futurism and exterior trompe l’oeil additions, notably with inlaid mosaics.

Today his works are widely visible in Europe, the United States and Japan.