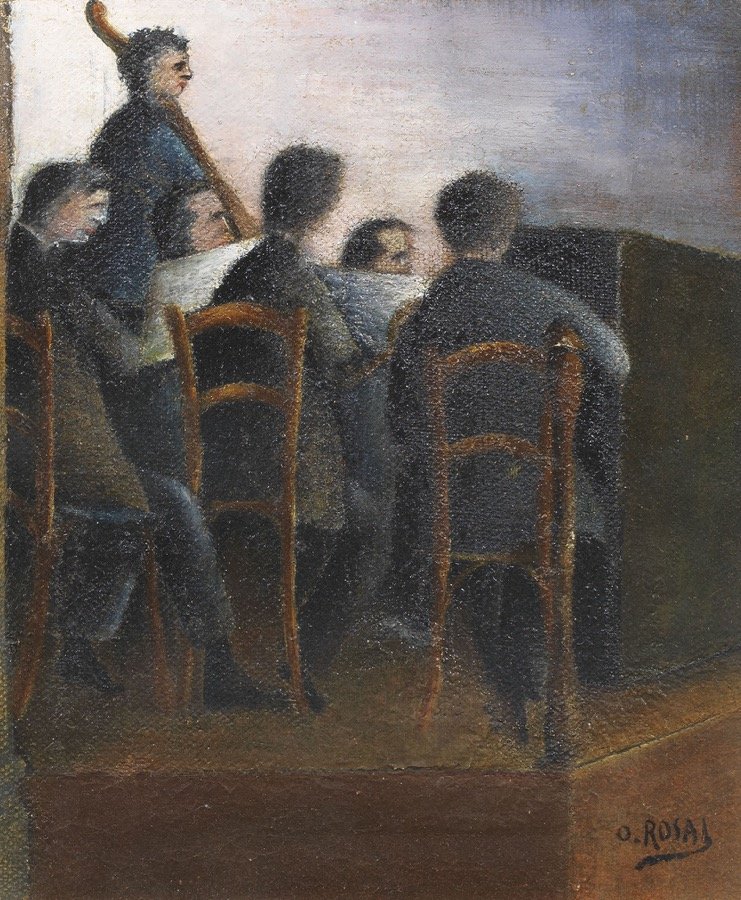 Ottone Rosai was the son of a Florentine carpenter and carver. He developed from an early age his interest in observing the surrounding reality. He attended the Institute of Decorative Arts, studying the ornate. Whilst working in his father’s shop, instead of paying attention to the tools and carvings, he observed the working men, portraying them.

In 1910 he enrolled in the Academy of Fine Arts, a place he had so dreamed of, but that proved to be a bourgeois environment with avaricious professors and envious students, and from which he was expelled. Thanks to his father who rented a studio, Rosai began to paint and sculpt, holding his first exhibition. He received much praise, and the acquaintance of Marinetti, Boccioni, Carrà and Severini led him, in 1914, to create futurist works and to adhere to interventional unrest that led to his participation in the First World War.

The Post First World War years represented for Rosai the beginning of a new quest that took him back to 15th century Florence. In fact, from 1920 on, we can observe the most intimate and lyrical subjects, with the “little men” who become characteristic of his language, manifesting a rigour made of chiaroscuro, of defined and orderly lines, of a perfect balance between volume and mass. To his typical subjects such as still lifes, landscapes and the little men, during the 1940s, Rosai began to add the sea and subsequently an interest in the individual portrait.

Ottone Rosai attended the Accademia di Belle Arti in Florence, from which he was expelled after a few years for misconduct. Despite this dismissal, Rosai pursued a self-taught career in painting, studying Cézanne, Courbet and Corot. In those same years, the encounter with Papini and Soffici was fundamental for the shaping of his style, becoming close to Futurism and taking part in the Esposizione Libera Futurista at the Galleria Sprovieri in Rome in 1914.

As a real Futurist artist, he decided to volunteer in the First World War. As he returned home, he started to affiliate his point of view with the new ideas of a young Mussolini. Firstly, the main subjects of his paintings were family portraits and still lifes, then he began to represent the landscapes of Florence, depicting them from the point of view of its inhabitants, especially from the working class’s perspective.

His Futurist inspiration was often alternated with a Cubist tendency, before being translated in a pictorial austerity characterising his 1920s and 30s works. His first exhibition was held in Florence in 1920, but his success was confirmed in 1932  thanks to an exhibition at Palazzo Perroni.

During the 1950s, he achieved an international success, exhibiting in shows all over Europe: in Zurich, Madrid, Paris and London. In the last years of his career, his Post-War paintings achieved an even more marked Metaphysical and popular dimension. He passed away in 1957, while he was curating the display of a personal exhibition.