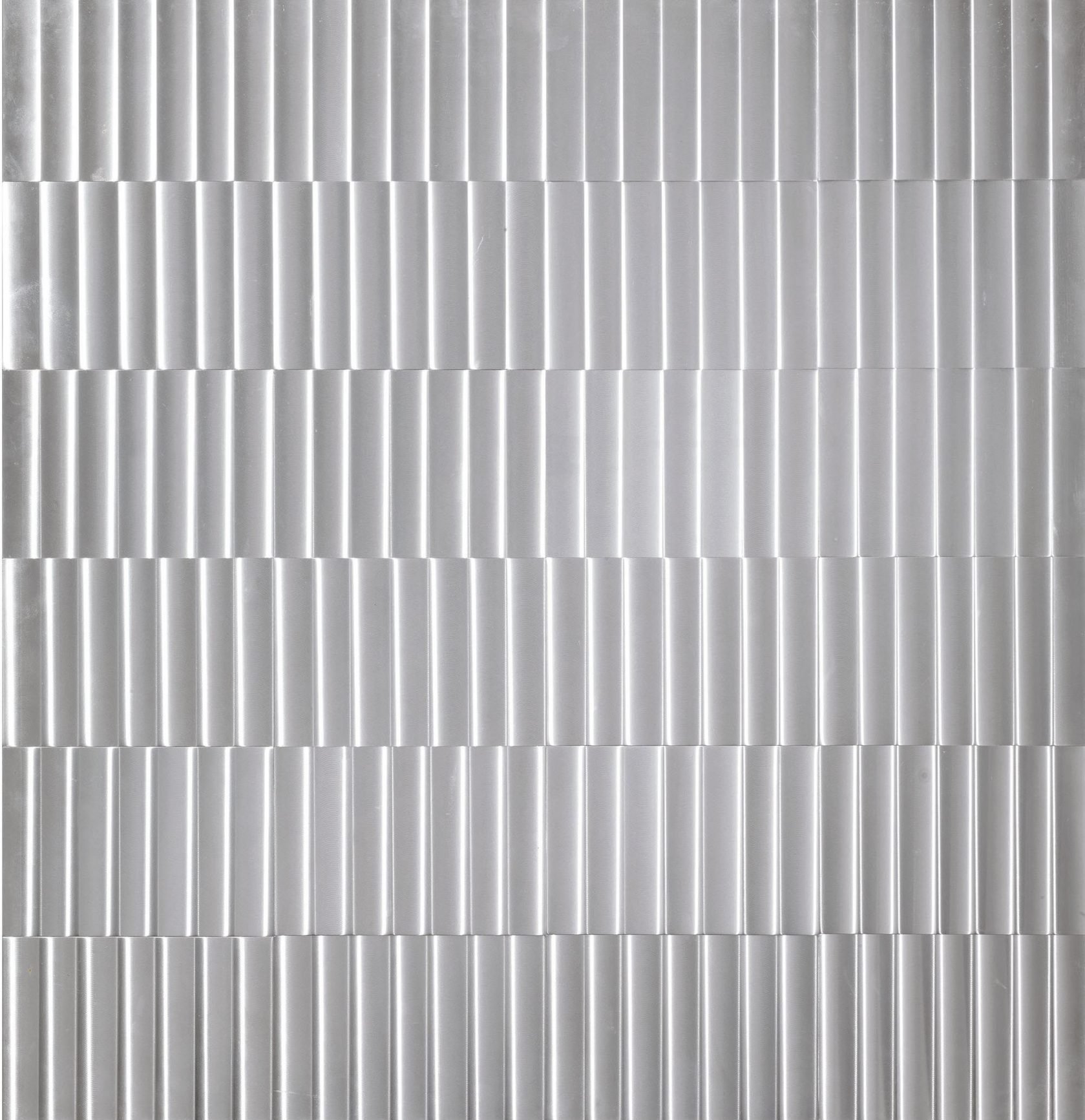 Getulio Alviani was an Italian artist, one of the greatest exponents of Programmed Art and Kinetic Art.

He trained in the studio of the sculptor Max Piccini and subsequently worked as a graphic designer and designer for an electrical equipment industry. Here he delves into the problems of visual communication and studies from small control devices to transformable wall structures.

At the end of the fifties, he created the first “light lines” characterized by milled metal surfaces organized and composed in a modular way.

In 1962 he took part in the Programmed Art exhibition organized by Olivetti in Venice, Rome and Düsseldorf. It also joins the international movement ‘Nove Tendencije’, together with the Padua ‘Gruppo N’, Enrico Castellani and Piero Manzoni.

Since the early 1960s, its light lines have become typical and recognizable, prototypes of milled aluminum surfaces with a vibrating texture which will subsequently be the tangible signature. Characterized by transparencies and kaleidoscopic effects that change in relation to the visual angle and the incidence of light, they are rigorously designed so that they can be reproduced in series: the surface, electrically milled with a precision determined by preordained programming, changes continuously according to the positions of the visual angles and incidence of light always generating different images.

In the early 1960s, he actively exhibited in many group exhibitions across Europe, particularly in Berlin, Amsterdam, Frankfurt and Paris. Here, in 1964 he exhibited at the Musée des Arts Décoratifs of the Louvre Museum during the exhibition ‘Nouvelle Tendance Recherches Continuelles’. He subsequently exhibited internationally in several cities in the United States, in Tel Aviv and Tokyo.

In addition, he participates on several occasions in major international art events: In 1964 at the Venice Biennale (and then again in 1986 and 1993), in 1965 at the VIII Biennial of San Paolo in Brazil and in 1968 at Documenta 4 in Kassel.

In 1965 he participated in ‘The Responsive Eye’ exhibition at the Museum of Modern Art (MoMA) in New York, an exhibition that sanctions Kinetic, Op and Programmed Art in the United States.

In 1973 he took part in the X Quadrennial in Rome and exhibited at the San Francisco Museum of Art in San Francisco.

In 1976 he began teaching at the Carrara Academy of Fine Arts which he left in 1981 to head the Jesús Soto Museum of Modern Art in Ciudad Bolívar in Venezuela which he dedicated to perceptual art.

In 2000 he was present at the group exhibition ‘Open Ends’ held at the Museum of Modern Art (MoMA) in New York.

He has carried out architectural projects and has devoted himself with an increasing commitment to the care of texts and exhibitions concerning the protagonists of structural and visual research at an international level.

Furthermore, he also dealt with chromatic phenomenology and the realization of three-dimensional structures starting from mathematical formulas.