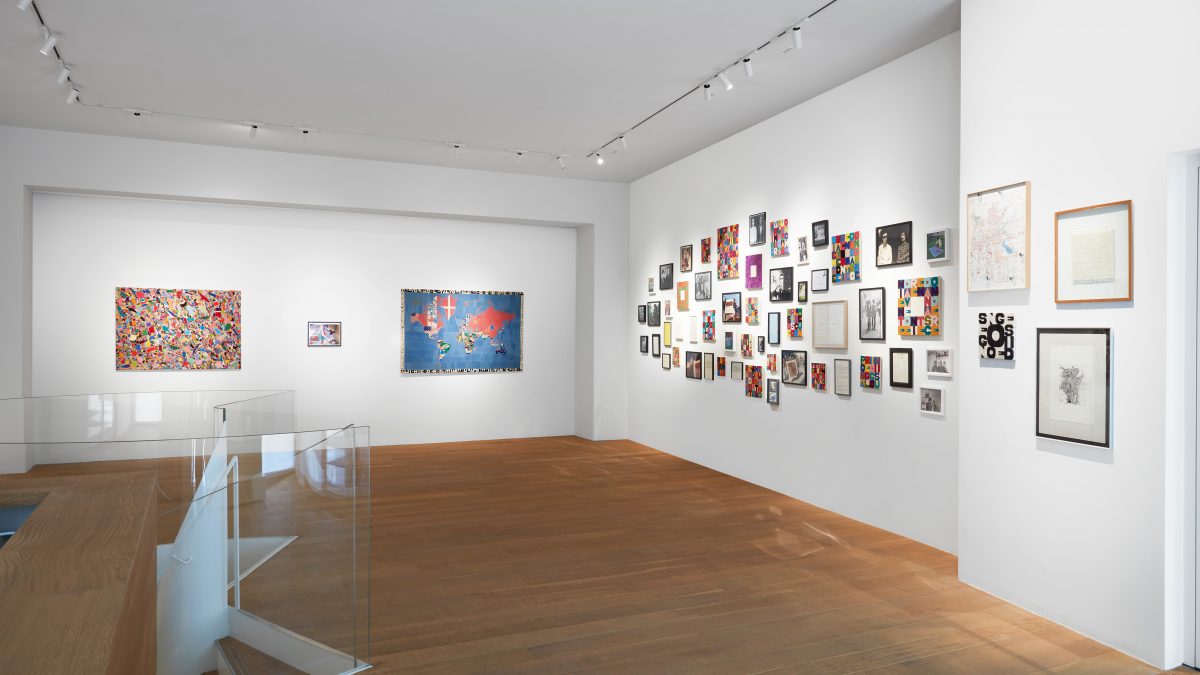 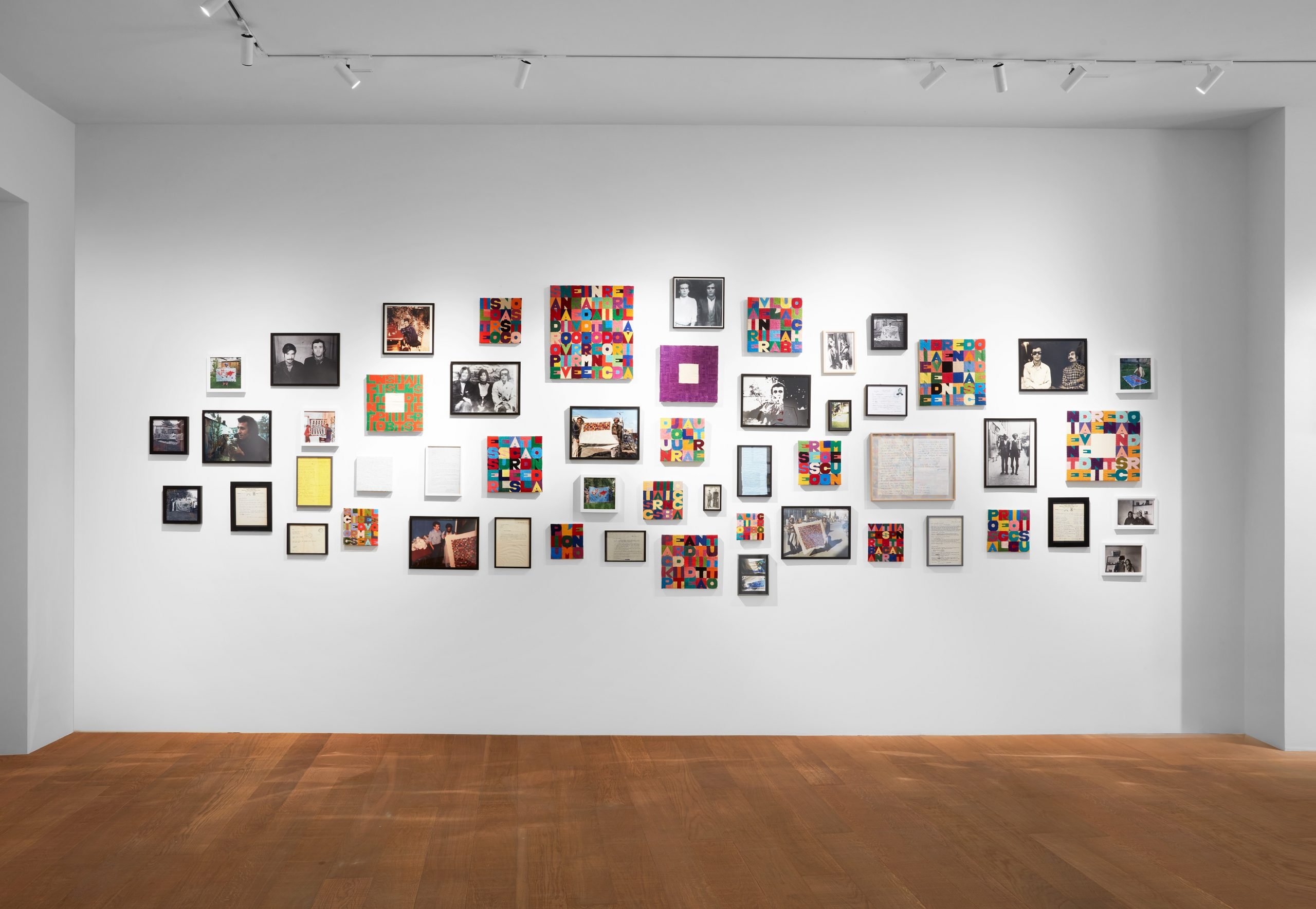 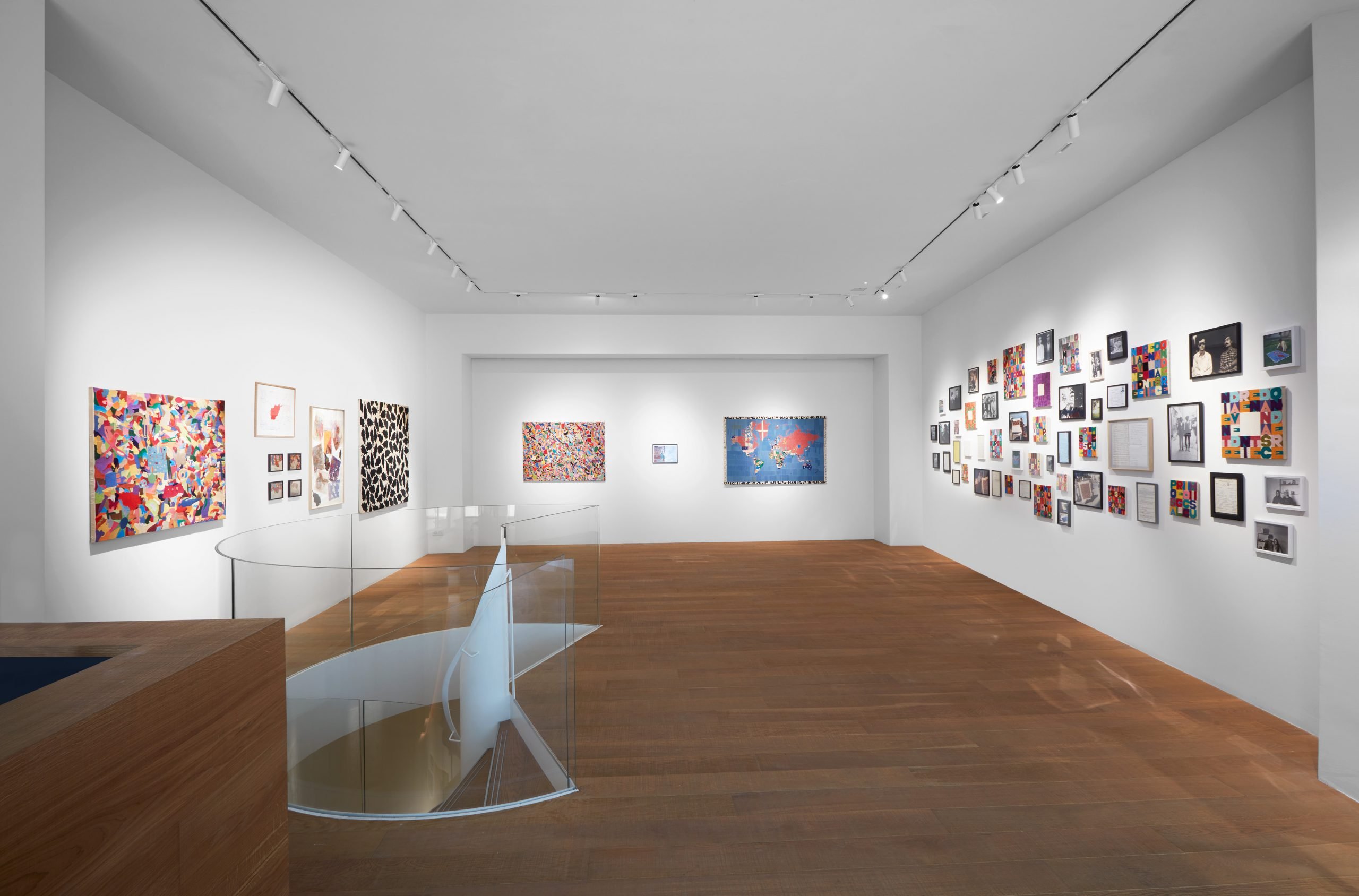 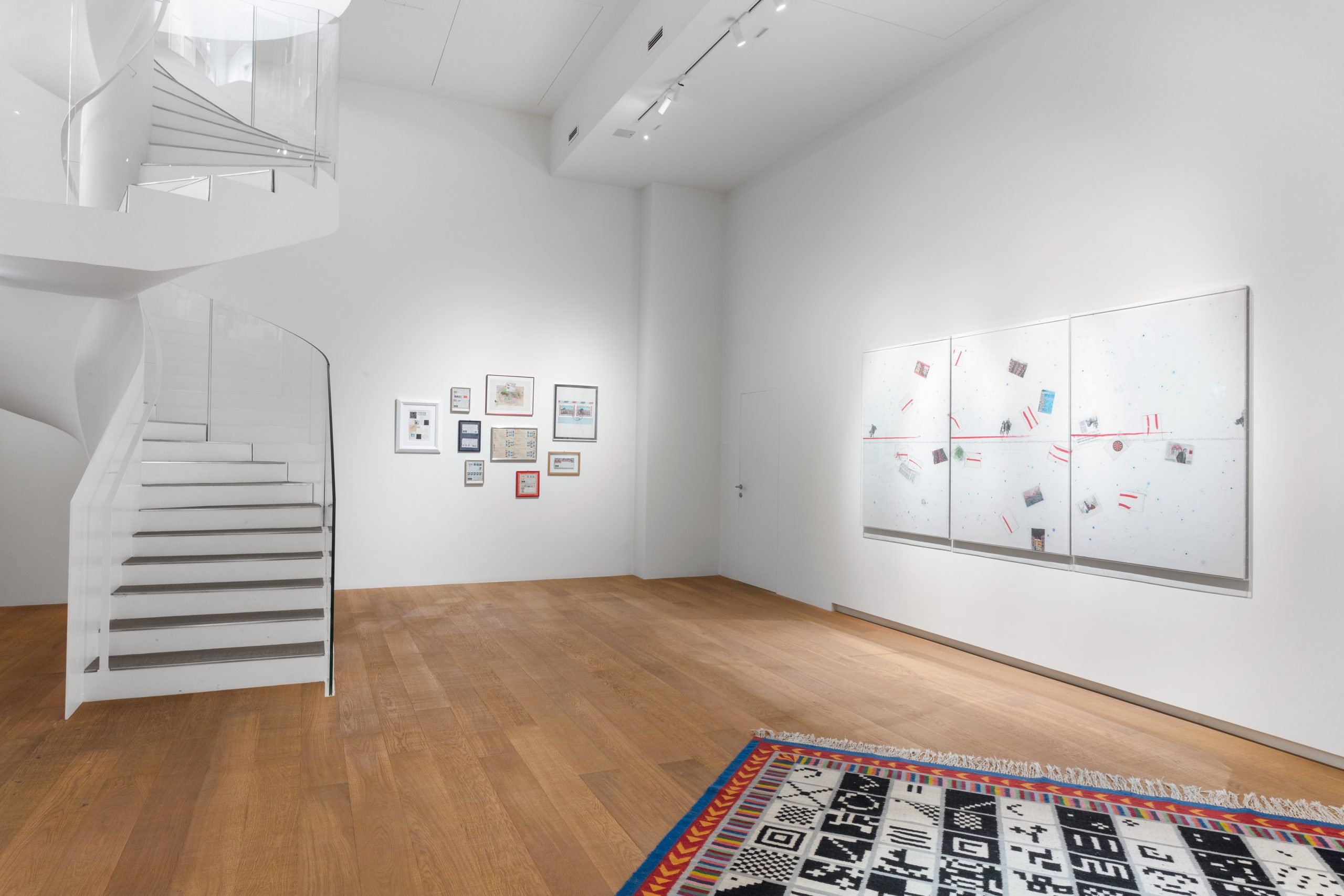 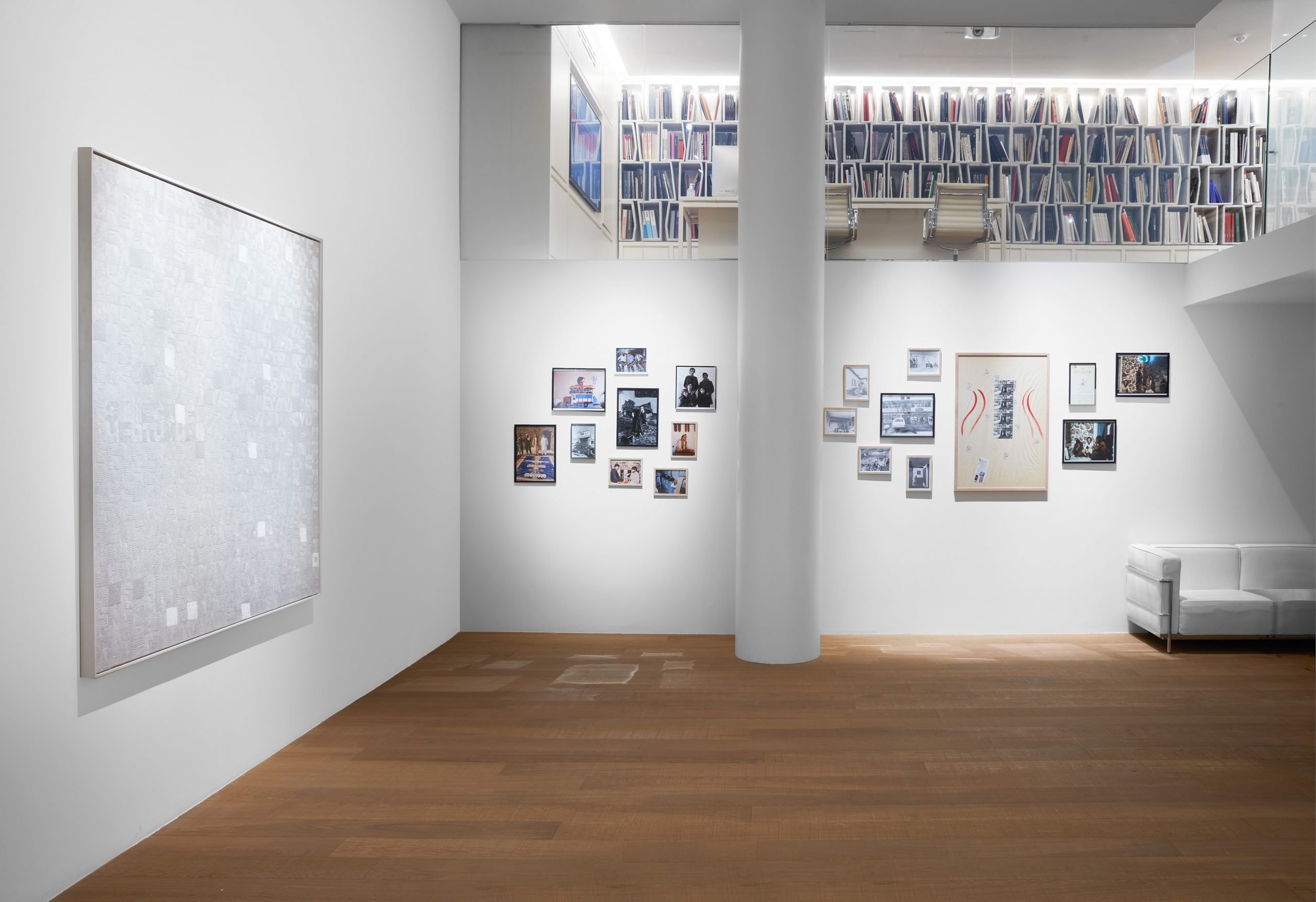 In the spring of 1971, while in search of “something distant”, Alighiero Boetti discovered Afghanistan. This was the beginning of a relationship that tied the man and his work to the Afghan people for 23 years until the artist’s death in 1994. Boetti maintained these links during the period of exile following the Soviet invasion of 1979, even welcoming some of his assistants into his own family in Italy. Afghanistan is the scene of the production of many of Alighiero Boetti’s best-known works, including the Mappe (1971-1994), made by female Afghan embroiderers. His artistic intentions, his experience of the country and his intellectual curiosity give rise to works that act as cultural and geopolitical seismographs. His work bears witness to the socio-political transformations that affected the Middle East in the 1970s and 1980s, seeing, for example, the embroiderers flee to Peshawar in Pakistan, where some of the last embroideries were produced.

Alighiero Boetti – “Thinking about Afghanistan” presents a selection of works typical of this period, the Lavori postali (Postal works), which are iconic embroideries and a series of works on paper conceived in his Roman studio at a time when it was impossible for him to travel to Afghanistan. These include Primo lavoro dell’anno pensando all’Afghanistan (First work of the year while thinking about Afghanistan) from which the exhibition takes its name. This is accompanied by a rich selection of photographs and archival documents loaned by the artist’s family, which give an insight into the context in which Alighiero Boetti worked.

The distance that the artist sought to cover by travelling to Afghanistan is presumably a desire to distance himself from the “guerrilla” of Arte Povera, a movement theorised three years earlier by Germano Celant and from whose framework the deeply subversive Alighiero Boetti sought to break free. The end of the 1960s and the beginning of the 1970s were also marked by the beginning of the “years of lead”, which saw Italy become the scene of clashes between extreme left and right-wing militants. Alighiero Boetti admits: “I considered the journey from a purely personal and hedonistic point of view. I was fascinated by the desert… the bareness, the civilisation of the desert.”

In 1971, ruled by the reformist Shah Mohammed Zahar, Afghanistan was an open country, at the crossroads of the hippie trail that many Westerners took on their way to Kathmandu. It was also a place of exchange and trade where one could meet Indian, Pakistani and Iranian merchants and European expatriates. One of the first works that Alighiero Boetti created in Kabul was a Lavoro Postale (Postal Work). An avid traveller, Boetti spent long periods on different continents. His stays in countries such as Ethiopia, Guatemala and Japan inspired the creation of these works, based on the mathematical permutation of the stamps. The postal services, unaware of the formal uniqueness of each envelope, which they themselves determine by the placement of a stamp, its colour and design, are the anonymous workers of the work of art that a letter becomes once it reaches its destination.

In Kabul, Alighiero Boetti met Dastaghir, a young employee of the hotel where he was staying, who helped him to obtain the large quantity of stamps required for the Lavori Postali. In the autumn of 1971, with Dastaghir Boetti opened the now famous One Hotel in Kabul. Boetti would return twice a year, often with his family. He had a room there which, upon his arrival, would be transformed into a studio, the basis for his Afghan projects. Dastaghir was also the liaison between Alighiero Boetti and the Afghan embroiderers who assisted the artist in the execution of his series of embroideries on fabric, notably the iconic Mappe. Each of these maps, embroidered using the ancestral Afghan technique, is an X-ray of its time, a reminder of the transience of nationalist concepts and an infinite variation of the same rule. We see the flags change according to the world’s geopolitical fluctuations, but also the seas, which are sometimes green, violet or blue, the only spaces of chromatic innovation left to the goodwill of the Afghan embroiderers who can often only imagine the ocean from this landlocked territory that is Afghanistan.

Another series of Boetti’s embroideries executed in Kabul and Peshawar are the Ricami (Embroideries). These works form a bridge between East and West, between content and form, in that the artist determines the meaning of the word and leaves the choice of colours to chance. They are composed of mosaic-like grids of letters combined into words and phrases the viewer has to decipher according to a direction of reading that varies from one work to another. The selected sentences are taken from proverbs, quotations or Sufi poems. Boetti’s key phrases (Ordine/Disordine, Segno/Disegno…) (Order/Disorder, Sign/Drawing…) are also present. A monochrome work from this series, a major work because of its rare size (172 x 178 cm), is among the works shown in this exhibition.

At Alighiero Boetti – “Thinking about Afghanistan”, Tornabuoni Art is also presenting two examples of Tutto (Whole), including a rare two-colour copy representing a constellation made of black maps of Afghanistan on a white background. The Tutto works, which Alighiero Boetti called “the height of theory, the height of conceptualism”, obey a rule that combines different recognisable cultural symbols and forms; placed side by side, these blend their own identities into a Tutto, a “Whole”. The work of art defines itself, the boundary of one form leading to the next. A multiplicity of understandings is offered to the viewer. One can let one’s gaze wander over the embroidery and discover a guitar, a waving hand, a pipe, a shark, a gun, a paintbrush, a letter… Some shapes are left to the viewer’s appreciation: a round shape can be a sun, a sphere or an eye. It is an endless game of colourful riddles. The concepts of harmony, loss of identity and the blurred boundaries between abstraction and figuration are at the heart of this work, which is considered the pinnacle of Alighiero Boetti’s embroidery art and a sum of all his previous works.

Alighiero Boetti’s embroidered works reveal his philosophy: as an artist, he creates the rules of the game and invites the viewers to play. Boetti places us – and himself – in a tension between control and chance, between the conceptuality of a work and its physical manifestation.

The body of works on paper known as Tra sé e sé (Between oneself and oneself) are unique in their process of realisation. Whereas Boetti previously had to wait for his designs to be made by others, in this series the time between conceptualisation and realisation is considerably shortened.

In 1980, Afghanistan became an inaccessible territory as a result of the critical political context and the Soviet invasion. As if to compensate for this state of forced exile and after suffering the loss of his mother, Alighiero Boetti isolated himself and gave life to a new body of work in his Roman studio, which represents and expresses his deep disillusionment with humanity and the political turmoil and divisions of the world.

Boetti originally conceived this series in the 1970s, inspired by a game he used to play with his daughter, Agata. However, in the following decade he introduced new works into the series, including Senza titolo (Primo lavoro dell’anno pensando all’Afghanistan) presented at Tornabuoni Art Paris. On some of the works, the artist pasted clippings and cut-out photos, as if he were capturing his concerns and thoughts on paper. Some of these drawings, as their title suggests, were made from two aerial views, showing a process carried out by a ‘doubled’ Boetti who often used both his right and left hands – in line with the experiment of splitting his name, undermining the concept of individual uniqueness, which led him to sign his works ‘Alighiero e Boetti’ from 1972.

“We sometimes made paper cut-outs of our hands and placed them on the floor, a pair on each side of the room. We then connected them with a long line of letters and objects of various shapes and sizes, usually starting with the smallest pieces, before adding larger ones. When this long line of ‘everything’ was ready, Alighiero would place his hands at one end of it and I would do the same at the other end, thus blocking the objects placed between us and completing the circuit. We called this game Tra me e te (Between me and you) and ended up making a series of works inspired by it. He called the series Tra sé e sé (Between oneself and oneself).”